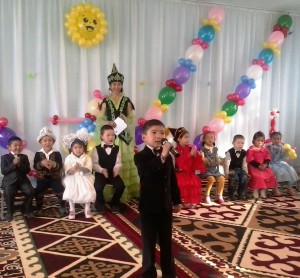 On October 24 an opening ceremony of “Seitek” kindergarten took place in Kurama rural district of Panfilov region, where Bank “Bai-Tushum and Partners” acted as one of the main sponsors. The grand ceremony was opened by the former President of the Kyrgyz Republic Otunbaeva R.I. The opening ceremony was also attended by the plenipotentiary representatives of the Government of the Kyrgyz Republic Azyrankulov A.D., acting head of the state administration – Mayor of Panfilov region Asypbekov T.A., head of the Kurama rural district of Panfilov region Satarkulov O.A., as well as parents and children – the future foster children of the kindergarten.

In 2012 the Board of Directors of “Bai-Tushum and Partners” made a decision to expand the charity activities and support the projects that facilitate the improvement of lives of the population in Kyrgyzstan. After researching the most pressing challenges in the remote regions, the Bank has chosen six social projects in each region to provide funding. In Chui region “Seitek” kindergarten was such a project, which required equipment after renovation. In September “Bai-Tushum and Partners” provided KGS 298,650 to purchase cooking equipment and household appliances.

The kindergarten is designed for 120 children. The allocated funds were used to purchase all the necessary items for the kindergarten: bedding, appliances, kitchenware, dining equipment, office supplies, school supplies, carpets, toys and much more.

Speaking at the opening ceremony, the General Manager of “Bai-Tushum and Partners” Shamshieva G.J., said: “For more than 11 years, “Bai-Tushum and Partners” provides charitable assistance to the most vulnerable and needy social group. This year we have allocated funds in the amount of KGS 10 million for the implementation of projects to promote the development of economic potential and social infrastructure. We are confident that the opening of “Seitek” kindergarten contributes to the improvement of the region’s social infrastructure, while this new kindergarten provides places for as many children as possible and ensures decent pre-school education”.

As a part of other social projects this year “Bai-Tushum & Partners” plans to build children’s playground in Talas region, repair secondary school in the Jalal-Abad region, repair the heating and sewerage systems of “Kelechek” Family and children relief Centre in Chui oblast. The bank will also pay considerable attention to the access of rural population to drinking and irrigation water. Thus in 2012, 2 projects were approved for the repair of water line in Karasu region of Osh oblast and irrigation system in the Kochkor region Naryn oblast. It is expected to complete the projects’ implementation by the end of 2012.