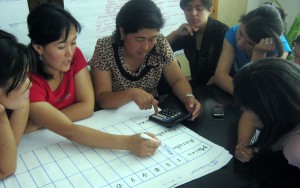 The loan product provides funding for entrepreneurship of women and youth. Selected customers will undergo training “Start Your Business” according to CEFE method (which means “the modern economy is formed by knowledgeable and competent entrepreneurs”). During the training, participants are taught the basics of starting and running own business. In other words, they acquire knowledge what is necessary to successfully start their own business, how to create a product and how to sell it, how to make financial calculations to avoid losses, and more.

Realizing the importance of improving the financial education of the population in Kyrgyzstan, a session on financial literacy “Plan Your Future” is included in training program.

“The knowledge gained on the program “Start Your Business”, as well as provision of financing under the loan will be a good opportunity to support the business initiatives of the economically active population, which will undoubtedly lead to improving their living standards and welfare of family”, – told Nurgul Torobaeva, Deputy General Manager of CJSC MFC Bai-Tushum & Partners.

Bai-Tushum & Partners has been operating in the micro lending market for over 11 years. During this time, more than 120 thousand Kyrgyz citizens have obtained loans in the amount more than 9.7 billion som. Today the Company is one of the three largest organizations in the microfinance sector and its share is over 19% of the total loan portfolio of the sector, and also it is a reliable, stable company with an impeccable reputation not only in Kyrgyzstan but also in Central Asia. On July 15, 2011 Bai-Tushum & Partners became the first microfinance organization in Kyrgyzstan that has obtained a deposit license.

“Promotion of sustainable economic development in the Kyrgyz Republic” Program, implemented by Deutsche Gesellschaft für Internationale Zusammenarbeit (GIZ) GmbH (German agency for international cooperation) on behalf of German Federal Ministry for Economic Co-operation and Development (BMZ), supports the Government of Kyrgyzstan in main directions of economic development. The program is implemented from 2008. The work is based on four components: reformist politics, reinforced value added chains, local economic development, and access to finance. The program’s actions are directed at holding structural changes in the economy of the country, contributing to an increase of income and employment. Thus for example, the program has conducted numerous trainings for unemployed women and youth, at the end of which they gained skills and knowledge that will help them create their own business.

KIVA Microfunds is an Internet platform, combining people with the purpose of lending to socially vulnerable population around the world and contributing to global efforts on poverty alleviation. Kiva Microfunds cooperates with 154 microfinance institutions in 62 countries around the world.