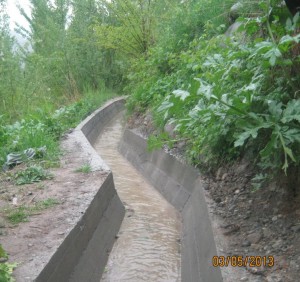 In May 23, 2013 the solemn ceremony of putting into operation of the reconstructed irrigation canal took place with participation of representatives of the Bank, local administration and elders of the village in Kyzyl-Bulak village of Batken oblast.

In the village are more than 780 households which are mainly occupied with agricultural, cultivating of fruits and vegetables. However, due to destroyed state of trays people of the village were able to irrigate just 140 hectares of sowing lands which annually brings to loss of about 100 ton of apples, wheat and corn.

The new irrigation canal, for reconstruction of which was allocated 560 000 KGS by the Bank “Bai-Tushum and Partners”, allow to irrigate in full about 185 hectares sowing lands and gather good harvest without losses. Water has already started in canal and in this year local people forecast increasing of harvest which comes to improvement of financial prosperity of more than 4000 people of the village.