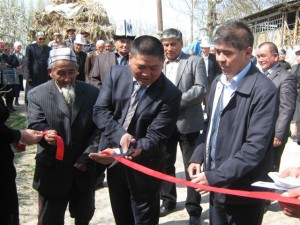 People of the village was obliged to go for water to neighboring villages for economic needs  and cooking during about several yearsand and use  polluted water in spring and fall, which is harmful for their health. The Bank “Bai-Tushum and Partners” allocated 1 281 554 KGS for carrying out overhaul of water line and providing people of the village with drinking water.

«Today water providing for people of villages is one of the main problems in republic scales.  In 2013 the Bank is planning new projects on irrigation system and access to clear drinking water. Successful implementation of each similar project has strategic meaning; because investing to projects of clear water, we are investing to health, prosperity and increasing of living standards of people in regions – emphasized Gulnara Shamshieva, General Manager of “Bai-Tushum and Partners” MF Bank.

Moreover, it should be mentioned that additionally the access to clear drinking water was also provided to socila objects of Kyzyl-Koshchu village: the school, the kindergarten and medical points.

At present all works on this object are completed, the water line was transferred to balance of village board “Joosh” of Kara-Suu region in Osh oblast.

About the Bank “Bai-Tushum and Partners”