New campaign from “Bai Tushum”: Send and receive remittances and cool gifts are waiting for you.

Starting today, a new interesting campaign “Happy Transfer” starts in Bank “Bai Tushum”. Through this campaign, you not only can quickly and profitably send money to relatives and friends or get it, but also get cool prizes.

Now sending and receiving money in the Bank “Bai Tushum” using the international money transfer systems Zolotaya Korona, CONTACT, RIA, and Western Union has become even more profitable. Anyone who sends money or receives it from relatives and friends becomes a participant in the “Happy Transfer” campaign. It will be carried out in three stages. The duration of each is two months. Bai Tushum customers will be able to receive first prizes after August 3.

The prizes include everything that will certainly be put to good use in each house – a TV, a two-compartment refrigerator, a freezer, a Samsung A10 smartphone or XiaoMI a vacuum cleaner, a multi cooker, an oven, a coffee maker, an iron, a blender and much more.

The winners of the second stage will be determined on October 5, and the third – the final stage – on December 7. At the end of each stage, the bank will award 27 winners (!)

In order to become a campaign participant, no any special actions are required. You just need to send and receive money transfers via the Zolotaya Korona, CONTACT, RIA, and Western Union systems. In the meantime, participants with the largest amount of received and / or sent money transfers become the campaign winners. To determine the total volume, all transfers in foreign currencies will be converted into KGS at the exchange rate of the National Bank at the date of transfer.

Winning places will be determined within each group of branches of the Bank “Bai Tushum” by the largest amount of remittances on the basis of three winners in each division of the first and second group of branches.

The first group of branches includes the Head Office, the Bishkek branch with cash outlets in the city of Bishkek, Osh, Jalal-Abad and Batken branches.

You can find the rules of the Happy Transfer campaign here: Rules of campaign on money transfers2019_ 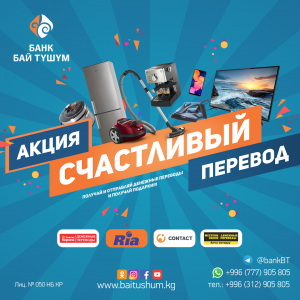