Сare of a children is our important responsibility 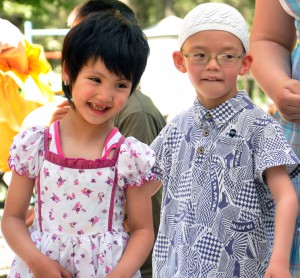 Today position of children in our country is required a special attention. Thousands of children do not attend kindergartens and schools. It is complicated to find districts where is constructed children teeters and children’s playground, but we can meet kiosks where sells cigarettes, wines and liquors and film discs which is prohibited for children upbringing.

However our world is around of kind people, and there are the team which always take care of children, give a love and an attention, helps and renders financial and moral support – this is the Bank “Bai-Tushum and Partners”. If each organization and team takes care as the team of the Bank “Bai-Tushum and Partners” there will be a lot of happy children and children’s smiles.

All the best for children

A charity activity is one of the most effective ways of showing of social and civil responsibility. Within charity activity the Bank set the goal of rendering support to the needy people who receive less support from the government and other organizations.

It became traditional the rendering of charity support to children’s home, social vulnerable children, including children from asocial families, special needs children, to boarding schools and other social institutions through participation in financing on purchasing of necessary goods or organization of holidays and likewise rendering other help, among organizations following are:

• Residential treatment center «Kelechek» Ysyk-Ata region, Chui oblast which is under the patronage of the Bank;

In this year, charitable actions of the Bank covered more than 1500 children which received support in kind of address delivery of gifts with sweets, grocery packages, toys and office supplies. By the holiday, the Bank helped to solve number of problems of several child care social facilities with which staff of the Bank is connected by long-term friendship. For orphanages were purchased household appliances, and were organized holiday and competitions with prizes. For the last 4 years the Bank rendered charitable and sponsor’s support to children and child care facilities throughout Kyrgyzstan for amount more than 2 million KGS”.

Social projects of the Bank

Participation in charity and sponsorship projects take special place in social activity for “Bai-Tushum and Partners” since foundation, which confirms its commitment to the best traditions of sponsorship and it shows the evidence of financial sustainability and stability. In 2012 the Board of Directors of the Bank “Bai-Tushum and Partners” made decision on the expansion of charity activity and project support contributing to the improvement of living standards of population in regions of Kyrgyzstan.

Since 2013 the Bank “Bai-Tushum and Partners” started actively to contribute solutions to one of the painful problems in regions of Kyrgyzstan is the access to water and maintenance of irrigation system.

Maintenance of the irrigation system in Kum-Dobo village

On April 25, 2013 the solemn ceremony of putting into operation of the renovated pumping plant “Kochkor -Ata” took place with participation of akim (mayor) of Kochkor region, representatives of local government, employees of agriculture department and local inhabitants.

Annually, due to lack of water value, inhabitants of Kum-Dobo village used only 124 hectares of land and lost about 200 ton of grains, barleys and 600 ton of potatoes plant. The Bank “Bai-Tushum and Partners” allocated of 900 thousand KGS for purchase and installment of the additional pumping plant and also new trays which allowed irrigating in full about 227 hectares of sowing lands, to gather good harvest without losses, and thereby to improve financial wellbeing of more than 6000 inhabitants of the village.

On April 4, 2013 there was the solemn ceremony of putting into operation the new water supply line in Kyzyl-Koshchu village, Kara-Su region of Osh oblast.

At present there are living 580 families and 2 500 people in Kyzyl-Koshchu village. Water supply line was constructed in 1970 and for 40 years of operation the water supply system is failed.

Inhabitants of the village was obliged to go for water to neighboring villages, and using in spring and fall the aryk (polluted) water, which is harmful for their health, for economic needs and cooking during about several years. The Bank “Bai-Tushum and Partners” allocated 1 281 554 KGS for carrying out overhaul of water line and providing inhabitants of the village with drinking water.

«Today water providing for inhabitants of villages is one of the main problems in republic scales. In 2013 the Bank is planning new projects on irrigation system and access to clear drinking water. Successful implementation of each similar project has strategic meaning; because investing to projects of clear water, we are investing to health, prosperity and increasing of living standards of people in regions – emphasized Gulnara Shamshieva, General Manager of “Bai-Tushum and Partners” MF Bank.

Moreover, it should be mentioned that additionally the access to clear drinking water in Kyzyl-Koshchu village received also social facilities of the village: the school, the kindergarten and medical assistants and obstetric point.

Reconstruction of the irrigation system in Kyzyl-Bulak

The next successful completed project is the reconstructed irrigation canal in Kyzyl-Bulak village of Batken oblast, the solemn ceremony of putting into operation was on May 23, 2013

In the village are more than 780 households which are mainly occupied with agricultural, cultivating of fruits and vegetables. However, due to destroyed state of trays inhabitants of the village were able to irrigate just 140 hectares of sowing lands which annually brings to loss of about 100 ton of apples, wheat and corn.

The new irrigation canal, for reconstruction of which was allocated 560 000 KGS by the Bank “Bai-Tushum and Partners”, allow to irrigate in full about 185 hectares sowing lands and gather good harvest without losses. Water has already started in canal and in this year local inhabitants forecast increasing of harvest which comes to improvement of financial prosperity of more than 4000 inhabitants of the village.