Water projects of “Bai-Tushum and Partners”: reviving water in each house 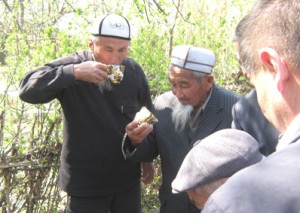 Microfinance bank “Bai-Tushum and Partners”, since 2013 actively started to contribute to the solution of one of the painful problem in regions of Kyrgyzstan is access to drinking water and maintenance of irrigation system. Recently, the one of the water projects was put into operation in Osh oblast which was financed by the Bank “Bai-Tushum”. The water supply system was completely repaired in Kyzyl-Koshchu village of Kara-Suu region which provided the access to clear drinking water to 580 families living in this village, and also to social objects: schools and kindergarten, obstetrician and medical assistance points.

Social responsibility of business before the society is the part of philosophy of the largest companies in Kyrgyzstan. Microfinance bank “Bai-Tushum and Partners” is the one of them. In 2012 within of corporate social responsibility program the Board of Directors of the Bank made the decision on allocation of 10 million KZS for improvement life of population in regions of Kyrgyzstan.

-The Bank directed more than 3, 76 million KGS in total to social projects and charity in 2012. In 2013 “Bai-Tushum and Partners” continues to implement started projects, and at present conducts selection of new ones. In this year our major priority based on public inquiry is provision of the access to clean drinking water in regions, – clarified Gulnara Shamshieva, General Manager of the Bank “Bai-Tushum and Partners”.

Devoted of 2013 year to implementation of water projects, the management of the Bank actually assumed the state mission.

-Today water provision for inhabitants of villages is one of the main problems in republic scales. In 2013 the Bank is planning new projects on irrigation system and access to clear drinking water. Successful implementation of each similar project has strategic value; because investing to projects of clean water, we are investing to health, prosperity and increasing of living standards of people in regions – emphasized Gulnara Shamshieva.

Thus, the Bank invested to construction of new water supply line within of the last project on clear water provision in Kyzyl-Koshchu village of Kara-Suu region in Osh oblast which for 40 years of operation the system was failed.

In the opening ceremony, inhabitants of the village said they were obliged to go for water to neighboring villages and using the aryk (polluted) water for economic and cooking needs in spring and fall. Such kind of water is harmful for their health, especially for children.

The similar projects on which “Bai-Tushum and Partners” allocated more than 1, 28, million KGS is not the last one. The maintenance of irrigation system will be completed soon in Kotormo village of Batken oblast which covered four villages.

According to locals, there are 780 households which live at the expense of agriculture cultivating of 185 hectares of sowing lands. Unfortunately, due to emergency state of irrigation system Batken inhabitants were losing significant size of harvest. The Bank allocated 560 thousand KGS and now locals hope to rich harvest which is possible to feed some hundred families.

In Kum-Dobo village of Kochkor region in Naryn oblast are resided more than 6000 people. Annually, the village inhabitants lose the most part of their harvest, approximately 200 ton of grain and 600 ton of potato plant due to lack of sufficient water volume. In 2012 for maintenance of irrigation system of the village (with installation of additional pump for increasing of water supply) the Bank allocated 900 thousand KGS to local community.

The management of the Bank “Bai-Tushum and Partners” is sure that financing of socially significant projects and initiatives, and also charity activity promotes to trust increasing of citizens to banks, and the future of domestic business is closely connected and depends on level of social stability, sustainable development and prosperity of Kyrgyzstan’s population.

The Bank implemented projects last year which are promoted to development of economic potential, social infrastructure of regions and support of child care facilities.

• The kindergarten “Seitek” was equipped in Panfilov region of Chui oblast. The equipment was purchased in the amount of 300 thousand KGS.

• In residential treatment center “Kelechek” is made repair of sewerage and heating system for almost of half million KGS in Kirgshelk village of Chui oblast.

• The Bank allocated 322 thousand KGS to School №33 in Bagysh village of Jalal-Abad oblast suffered from spring flood; there were made repair of floors, roof and ceiling, and replaced heating and asphalted school yard.

• In Talac city was constructed child playground for 200 thousand KGS in yards of multistoried building where living 360 families.