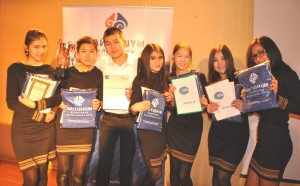 On January 22, the competition “Teenagers in free enterprise” (TIFE) 2013 ended in Bishkek, which started in November 2012 with the financial support of Microfinance bank “Bai-Tushum & Partners”.

TIFE project is aimed to develop entrepreneurial skills of teenagers of high schools and is implemented for 9 years by the team ENACTUS of the American university – Central Asia (AUCA).

“TIFE project is another contribution of the Bank in the development and support of new entrepreneurs in Kyrgyzstan. Participation in the project gave a great opportunity to talented and initiative teenagers to gain invaluable experience and practical knowledge to carry out their business projects”, – said Nurgul Torobaeva, Deputy General Manager of Bank “Bai-Tushum & Partners”.

This year 13 schools and 130 teenagers of high schools took part in the project. During 3 months the school teams actively studied the basics of business, economics, and developed social and commercial business projects, which must be realistic, well developed and profitable. On January 22 the teams provided their works on a competitive basis to the competent jury.

The team of school №29 was unanimously chosen as the winner of TIFE 2013, which offered online education through the creation of a virtual school. The holder of the second prize was team of school №70 with the project of installation of snack machines in schools. The third prize was given to upper secondary school №12, which developed a project on production and export of fuel bricks.

Moreover some teams were awarded special nominations and prizes. In the category “Best Presentation”, the team of school № 27 with the project of a cleaning company has won. The project of the school № 24 on the cartoon school for children was recognized as “the best social-oriented project” of the competition. “Best Speaker” was the student of the school № 14 Kubatbek Aidana. The project of lyceum school № 13 on the introduction of new technologies into the curriculum through the use of tablet PCs received a nomination for “Best innovative project”.