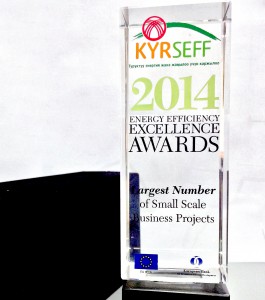 On November 19, 2014 under the egis of the European Bank for Reconstruction and Development and the European Union, the Kyrgyz Sustainable Energy Financing Facility– KyrSEFF held an award ceremony to celebrate the most successful projects with the best achievements in sustainable energy and environment preservation.

The ceremony was the first event held in Kyrgyzstan to acknowledge the best sustainable energy investment projects and a lively presentation of energy saving progress. The bilateral cooperation of KyrSEFF program with local partner financial institutions enabled to successfully roll-out the projects aimed at country’s sustainable development.

This August, Bai-Tuhsum Bank in conjunction with Tokmok mayor’s office and KYRSEFF launched Socium project in order to provide housing to the officials of state financed organizations in Tokmok. Bai-Tushum Bank allocated a total of more than KGS 34 mln. for the soft-term financing project implementation. This project will give an opportunity for 56 families of employees, who work at state-financed institutions with low incomes as teachers, health care professionals, community workers to own a house. An important aspect of the project is that future house owners receive grants to cover 35% from the European Union under KYRSEFF facility. All houses are built using energy saving technologies. High quality and certified materials and new technologies will enable to cut heating costs and increase houses’ useful life. Socium project won an award as the Best Project in Housing Sector for energy saving and comprehensive design. Awards for successful efforts were given to Bishkek branch’s Tokmok office staff: Zarema Iriskulbekova, Roza Usenova and Meder Boobekov.

Bai-Tushum Bank’s Bishkek and Karakol branches were also awarded for outstanding performance in sustainable energy financing. However that was not the last of Bank’s awards.

Kyrgyz Sustainable Energy Financing Facility (KyrSEFF) with loan portfolio of USD 20 mln. was launched in Kyrgyzstan in the end of April 2013 and has been a part of the Sustainable Energy Financing Facility (SEFF) of the European Bank for Reconstruction and Development (EBRD). KyrSEFF loans are accompanied by grants of 10 to 35 percent granted by the European Union Investment Facility for Central Asia (EU IFCA). www.kyrseff.kg

The European Union (EU) consists of 28 member states that have joined progressive achievements, resources and fates of their peoples. The 60 years of their combined efforts resulted in the established stability, democracy and sustainable development region with preserved cultural diversity, individual freedoms and tolerance. The European Union is committed to spreading and promoting its achievements.

European Bank for Reconstruction and Development, owned by 64 countries and two international institutions, supports the development of market economy and democracy. Visit us on the web, Facebook and Twitter.