Microfinance Bank “Bai- Tushum and Rartners” has received a loan from the EBRD for a total of $ 4 million US to finance micro, small and medium-sized enterprises 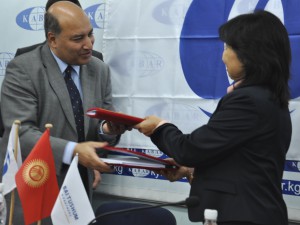 The EBRD is responding to increasing demand for local currency funding from small companies and entrepreneurs in the Kyrgyz Republic with a new loan to microfinance bank Bai Tushum and Partners, CJSC.

The loan for the local currency equivalent of US$ 4 million will be used by Bai Tushum for on-lending to micro, small and medium-sized enterprises (MSMEs) in the Kyrgyz Republic. The investment was signed during a visit to the Kyrgyz capital of Bishkek by the President of the EBRD, Sir Suma Chakrabarti.

Bai-Tushum is a long-standing partner of the EBRD and has a particularly strong record in reaching out to small entrepreneurs throughout the country. It is the first microfinance company to transform into a bank in Central Asia. “With this new loan, the sixth of its kind to Bai-Tushum, the EBRD expects to make an important contribution to the Kyrgyz economy”, Sir Suma said at the signing ceremony. “There is growing demand for local currency funding and the EBRD is very pleased to help meet this demand.”

“Considering the severe shortage of local currency funding in the Kyrgyz Republic, we highly appreciate the EBRD’s support in providing us with medium-term funding in local currency”, said Gulnara Shamshieva, the General Manager of MFB Bai Tushum and Partners, CJSC. “We will use the proceeds of this loan to expand our lending programmes for the development of micro, small and medium-sized enterprises in the Kyrgyz Republic, including those engaged in agribusiness sector where Bai Tushum has strong lending expertise.”

Local currency funding plays an important role in the EBRD’s lending strategy as a way of reducing foreign currency exposure for borrowers in the countries where it invests. The EBRD loan will also allow Bai Tushum to expand its lending operations in the southern regions of the country, where the bank has a strong presence. This will support further development of the small business segment across the country and help to address a major constraint on economic growth.

Since the beginning of its operations, the EBRD has invested around US$ 538 million in the Kyrgyz Republic in 88 projects across many different sectors of the economy. Operations are focused on fostering the private sector, in particular through support for MSMEs, alongside support to strengthen the financial sector and to develop critical infrastructure.

Bai-Tushum & Partners, CJSC has been operating in the micro lending market for over 12 years. During this time, more than 134,000 Kyrgyz citizens have received loans in the amount of more than KGS 11.6 billion. Today the company is one of the largest microfinance providers in the Kyrgyz Republic with 63 outlets throughout the country.

On 15 July 2011 Bai-Tushum & Partners, CJSC became the first microfinance organisation in the Kyrgyz Republic to obtain a deposit license. On 14 September 2012 it became the first microfinance institution in Central Asia to obtain preliminary approval from the National Bank of the Kyrgyz Republic to receive a banking license. Subject to obtaining the state registration certificate from the Ministry of Justice of the Kyrgyz Republic and compliance with requirements of the NBKR and applicable laws and regulations, Bai-Tushum & Partners, CJSC will be able to provide a full range of banking services.

The EBRD, owned by 63 countries and two intergovernmental institutions, is supporting the development of market economies and democracies. Follow us on the web, Facebook and Twitter.