Little Shirin, who lost both hands after being run over by a car, needs to have new upper extremity prostheses manufactured 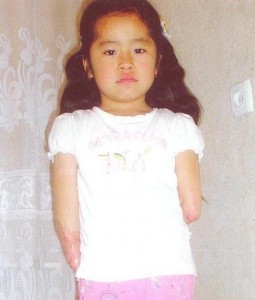 Madiyar kyzy Shirin, a seven year old girl, became disabled as a result of the car accident that took place on 20 July 2009 in Madaniyat settlement, Bakai-Ata district of Talas oblast. As a result of being run over by “Kamaz” truck, Shirin lost both her hands, got brain concussion, lost skin on the back and hip area of her body. Afterwards the girl underwent through multiple serious operations on skin transplantation, amputation and re-amputation of upper extremities.In April 2010 for the funds collected by sponsors the girl underwent expensive operation in Kiev. The German doctors selected and installed upper extremities prostheses. But, today the prostheses need to be changed since Shirin is growing and prostheses prepared earlier don’t fit.

New upper extremities prostheses may be manufactured only in Germany. For this Shirin needs 50,000 Euro. But neither the family nor the relatives have such money. But there is a hope that Shirin can be saved from disability and be happy, continuing her education in school.

In its turn, understanding importance of the operation for Shirin, “Bai-Tushum and Partners” Company provided 5,000 Euro. Shirin’s family in person of her mother, Umetalieva Medina Asizbekovna and grand-mother Mukadilova Roza Djoldoshalievna addresses everyone, who don’t remain indifferent to the tragedy of the little girl, to provide the aid they are able to provide for the expensive prostheses to be manufactured in Germany, by remitting funds to the settlement account, which is opened in the name of Shirin’s grand-mother, Mukadilova Roza Djoldoshalievna.